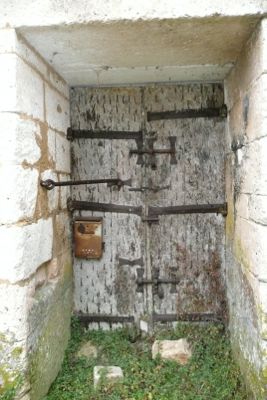 To the north-west of Puyrenier, at the end of a tree-lined path, La Combe and its outbuildings are accessed via a miniature château with machicolation which opens out onto an inner courtyard which was once accessed through heavy double doors.

The heavily restored château, which is lateral to the entrance, extends the sixteenth- and seventeenth-century dwellings which are merged with two towers at intervals, one of which has a high roof with machicolation and a staircase in front leading up. The north façade, on the same side as the terrace, overlooks the Nizonne River and a stretch of former marshes.

From its beginnings the house was the stronghold of the de Maillard family. Jean de Maillard, a horseman, obtained the ennoblement of the house as well as permission to raise the height of the property with towers, terraces and machicolation on 22 October 1606 from Isabelle de Beauville, the Countess of Cars, acting as Dame de la baronnie de Mareuil.

Generations of the de Maillard family would continue to live in the château until 1961. Having changed hands several times, and then being abandoned, it was finally bought by the Gury family in 1970 who then undertook major restoration work on it. Mrs Edmonde Gury was mayor of Puyrenier from 1977 until 2008 and was the longest-serving female mayor in France for several years.

In January 2011, following the death of Madame Gury, we fell in love with the place and moved in to begin a new adventure.